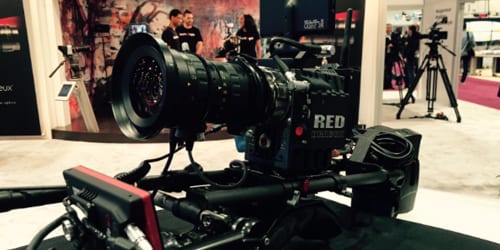 The National Association of Broadcasters, or NAB, held their annual conference in Las Vegas this week and True Film Production was in attendance. NAB Show is the largest entertainment and media convention in the world covering topics that range from new technology and innovation to ideology and public affairs. This year, over 100,000 people were registered to attend from over 160 countries worldwide and included people in broadcast, digital media, film, entertainment, telecom, post-production, education, advertising and more. It is the place to be for anyone in the industry looking for new opportunities to learn, grow, and take their work to the next level. As a global company, True Film saw NAB Show as an opportunity to network with people from different geographical locations, compare strategies, and essentially learn from other people in the industry.

True Film was able to experience some really interesting exhibits at NAB Show. One exhibit was the Drone Pavilion where they set-up a “flying cage” to do demonstrations for the crowd. SPROCKIT was introduced, a new outlet for startups to present their ideas and their products. Of course, we also had to stop by the Walking Dead panel with star Steven Yeun and creator Robert Kirkman.

There were two big industry trends that were discussed at the conference. The first was broached by a study done by CyberLink Corp. that found that people are continuing their migration away from traditional TV watching and towards streaming devices at a rapid pace. Digital media devices such as Roku, Google Chromecast, and Apple TV are becoming more prevalent in households. It seems that viewers are really catching on to the idea of consuming media in a way that is most convenient for them.

The second trend which appealed more to True Film Production’s brand is the movement toward cloud storage and away from physical hard drives. True Film constantly uses hard drives for storing, transferring, and transporting footage. While services such as Dropbox and Google Drive have already steered us away from hard drives in some degree, the discussions at the conference suggested that the advances in cloud technology will eventually deem hard drives obsolete.

RELATED ARTICLE |  Time to Get Social

Of course, the technical highlights also peaked our interest at NAB Show. True Film particularly took interest in new cameras from two of the industry’s biggest brands. First, Blackmagic Design announced their Micro Cinema Camera, which is now officially the world’s smallest digital film camera. Blackmagic Design wanted to create a miniature camera for helicams and drones that was still able to capture cinema quality footage, and they did just that. The size, portability, and wireless remote control allows you to take your production to places you’ve never been able to go before.

The second camera that True Film took interest to is the Red’s newest “weapon”, Weapon. Yes, they named it that. The new upgrade will have a sensor with 8K capabilities! This is will be an upgrade from their Dragon model with 6K capabilities. Everyone was impressed with the product, however viewer experience is only ankle deep in the 4K technology. So the upgrade appeals more to film aficionados who want to experiment than to the actual consumer.

The NAB show was a unique and valuable experience for True Film Production. Not only was it fun and exciting to be in the midst of so many industry leaders and newsworthy announcements, but we networked with people and learned about our craft, allowing us to take steps towards bringing our company to the next level. 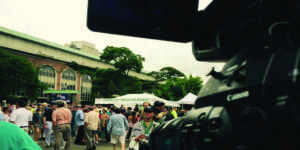 A Day in the Life of True Film: The Belmont Stakes
This June, True Film Production once again had the opportunity…
Shares